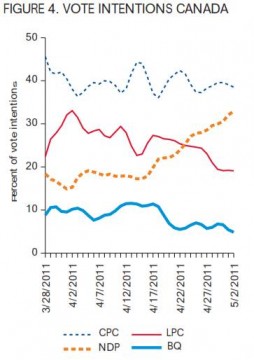 Vote Intentions over the 2011 Campaign

There is no democracy without free and fair elections. Elections provide a crucial opportunity to assess the actual workings of a democracy. Canadian elections are the primary focus of the Canadian Election Study (CES). The main objective is to explain what makes people decide to vote (or not to vote), and, if they do, what makes them decide to support a given party or candidate, and why parties gain or lose ground from one election to another.

The primary mandate of the study is to provide a thorough account of the election, to underline the main reasons why people vote the way they do, to indicate what does and does not change during the campaign and from one election to another, and to highlight similarities and differences between voting and elections in Canada and in other democratic countries. The second mandate is to contribute to the development of scientific knowledge regarding the motivations of voters and the meanings of elections and election campaigns in democratic societies. The third mandate is to assemble a rich set of data about Canadians’ attitudes and opinions on a wide variety of social, economic, and political issues, and to make that data publicly available to researchers in political science, sociology, economics, communications, and journalism.